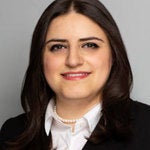 Before joining Kaufhold Gaskin LLP, Liana was a litigation associate at Simmonds and Narita LLP, where she represented various members of the financial services industry, including national banks, against individual and class-action claims brought pursuant to various consumer protection laws, including the Fair Debt Collection Practices Act, the Telephone Consumer Protection Act, section 17200 of the California Business & Professions Code, and related federal and state law claims.

Outside of the firm, Liana is a member of the Queen's Bench Bar Association and has volunteered to judge the ABA Law Student Division National Appellate Advocacy Competition (“NAAC”) in the past.

Liana received her law degree from UC Davis (King Hall), where she was an Executive Editor of the UC Davis Business Law Journal, and received the UC Davis Business Law Journal Editor Excellence Award, and the Public Service Law Program and Pro Bono Program certificates. During her last semester in law school, she externed full time for Justice Goodwin H. Liu's chambers at the California Supreme Court. As an undergraduate at the University of Texas at Austin, Liana received her bachelor's degree in Government and graduated with Highest Honors and College of Liberal Arts Honors.