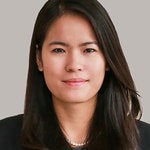 Quynh Vu's practice focuses on complex commercial litigation. She has a wide-ranging litigation practice, including representing clients in securities litigation, complex business litigation, and corporate disputes. She has extensive litigation experience in both state and federal court.

Quynh has litigated and achieved successful results for her clients including:

Before joining Kaufhold Gaskin LLP, Quynh was a litigation associate at Gibson Dunn & Crutcher LLP, where she represented some of America's well-known corporations. She recently served as a member of the trial team for the plaintiffs in Vergara v. California, a case which successfully challenged the constitutionality of teacher tenure laws in California. She was also part of an appellate team which successfully overturned a trial verdict in a shareholder dispute.

Outside of the firm, Quynh teaches Pre-Trial Civil Litigation at UC Berkeley.  Quynh is also on the Young Lawyers Editorial Board of the America Lawyer.

Quynh received her law degree from UC Berkeley (Boalt Hall), where she was an Articles Editor of the Berkeley Criminal Law Journal and served as a Student Graduate Instructor. As an undergraduate at the University of Virginia, she was elected to Phi Beta Kappa, and received her bachelor's degree in Economics and Political and Social Thought with Highest Honors.